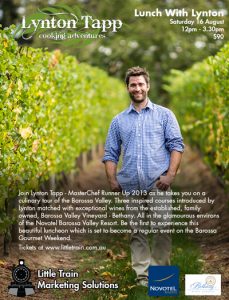 Lynton Tapp, runner up on Season 5 of Australia’s MasterChef came to us around six months after his experience on the show. We were engaged to act as both Manager an Agent. During our time working with Lynton we were able to secure a brand ambassador role with Red Lea, a book deal with Hardie Grant (to be released for Fathers Day 2015) and numerous engagements around Australia including Lunch with Lynton for the Barossa Valley Gourmet Food Festival. We worked to establish a brand including logo development, image consulting and the addition of marketing materials. Our work generated several key relationships for Lynton that will go on to generate further exciting projects for him including a partnership with Red Desert Tours, Bauer Media, RM Williams and more. As a part of Lynton’s role as a Mate of the Territory, we were able to secure a Presenter role for the Britz ‘Do the Territory’ campaign. These video vignettes have appeared across the web and showcase Lynton and the Territory.